by Jessika Toothman
Prev NEXT
7 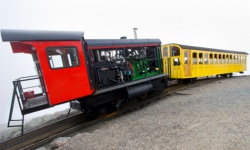 Mount Washington Cog Railway has a steep climb to tackle in order to make its way to the top.
iStockphoto/Thinkstock

The Mount Washington Cog Railway in New Hampshire is one of the steepest railways in the world -- at some points its gradient is more than 37 percent. Built all the way back in 1869, the Cog railway was the first of its kind to tackle a mountain, and the highest mountain in the Northeastern United States at that.

Families can stretch their legs and explore the summit of Mount Washington for about an hour during the middle of the 3-hour roundtrip train ride, enjoying the breathtaking views from the lofty summit. When the weather is clear, you can see straight to the Atlantic Ocean.