by Jane McGrath
Prev NEXT
9

Plan and Book in Advance 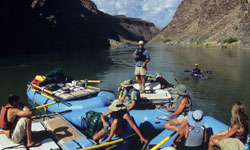 Reservations for rafting the Grand Canyon tend to fill up quickly, so book your trip far in advance.
Mark D. Callahan/Photolibrary/Getty Images

An extended river trip can't be a last-minute decision. Companies often book up a year or two in advance. And to go on the private two- to five-day trip from Diamond Creek, you'll need a permit, which is given out on a first-come, first-served basis one year in advance. The longer private trips require enrolling in the lottery.

Because of the high demand to ride the Colorado River from Lees Ferry to Diamond Creek, the National Park Service (NPS) instituted a lottery, and then a waiting list for non-commercial trips in the 1970s. By 2003, the waiting list was so long that people theoretically had to wait 20 years for their names to come up (in practice, some could take advantage of cancelled trips) [source: Whittaker]. It was clear that the waitlist wasn't a workable system, so in 2006, the NPS switched to a weighted lottery.

Lottery points are based on how many years it's been since your last trip (commercial or noncommercial), with a maximum of five years for five standard points. Those leftover from the old waiting system also get bonus points. People with more points get more entries ("tickets") in the lottery, and thus a better chance to win. The NPS doesn't allow someone to have more than one river trip each year.