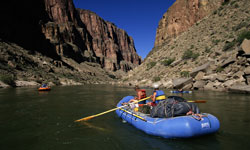 Most people see the Grand Canyon from the top -- but what about experiencing its wonder from the water?
Dann Coffey/The Image Bank/Getty Images

Every year, about five million tourists come to see the Grand Canyon, one of the seven natural wonders of the world. And no wonder it's so popular -- at about a mile deep (1.6 kilometers) and up to 18 miles (30 kilometers) wide, it's a massive and majestic sight to behold. The views are so beautiful from the top, however, that many don't think about visiting the river at the bottom. The water is, in fact, largely responsible for forging the canyon.

The Grand Canyon section of the Colorado River sees about 29,000 boaters each year [source: National Park Service]. As these adventurers can attest, you haven't fully experienced the canyon until you've rafted the Colorado River. From Lees Ferry to Grand Wash Cliffs, the Grand Canyon is 277 river miles (445.8 kilometers) long. End to end, a river trip by raft can take about two weeks. But boaters have plenty of options as to how long and how challenging they want their trip to be.

Although Native American Indian tribes had lived in the area for thousands of years, John Wesley Powell completed the first known expedition through the canyon on the Colorado River in 1869. Powell was a veteran who had lost an arm fighting for the North in the Civil War. Although three of the nine men who started the expedition abandoned the expedition and were never seen again, the rest survived, completing it in three months.

A modern-day rafting trip doesn't have to be as harrowing as Powell's expedition. But you will see plenty of adventure. It takes a good deal of planning and commitment, however, and the following tips will help prepare you.