by Kate Kershner
Prev NEXT
1 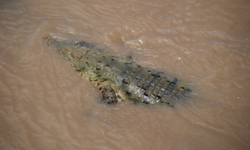 This guy probably isn't the surfing companion you had in mind.
iStockphoto/Thinkstock

We'd be remiss if we didn't send you on your Costa Rica-surfing way without some serious warnings. While Costa Rica has a low crime rate and is generally an extremely tourist-friendly country, that doesn't mean you shouldn't be aware of what you as a guest -- and a surfer -- are doing.

One thing to watch for as a surfer? Well, we haven't yet mentioned the crocs. Yes, crocodiles do live (and eat) near river-mouth estuaries, so ask locals about the area and dangers before you jump in. In fact, it's a good reminder to ask locals about conditions virtually anytime, especially if you're new: talking to shops and those in the know is absolutely essential for due diligence about a surfing spot. If you're looking at a popular break that looks terrific (and is empty), don't dive in. Ask about conditions; you can't always visually identify riptides, and they account for a huge proportion of Costa Rica's drowning deaths each year [source: Adventure Inn].

Don't forget your sunblock, and remember that petroleum jelly might be a life-saver when it comes to chafing. (A rash guard is also a good idea for both sunburn and abrasive board wax.) You might also want to talk to your doctor before you leave about ear drops, as infections are a pretty common surfing occurrence that can make an otherwise fantastic trip miserable.