by Clint Pumphrey
Prev NEXT
3 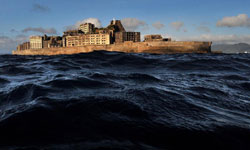 Hashima, once inhabited by thousands, is now an abandoned city.
Sankei/Getty Images

Hashima Island, located some 9 miles (15 kilometers) southwest of Nagasaki, is almost as strange for what isn't there as it is for what is there. Once considered the most densely populated place in the world with 334 people per acre (835 per hectare), this island mining community now stands completely abandoned in the waters of the East China Sea [source: Burke-Gaffney].

The Japanese developed Hashima when coal was discovered in the rock beneath the island and surrounding seafloor. The Fukahori family installed the first mineshaft on the island in 1887 before selling it to the Mitsubishi company for 100,000 yen. The company used tailings from the mine to enlarge the island to 15.6 acres (6.3 hectares) before encircling it with high seawalls [source: Burke-Gaffney]. The increased space allowed Mitsubishi to build housing for their miners, though apartments were cramped and primitive. As the demand for coal increased during WWII, Chinese and South Korean men were forcibly brought to Hashima Island to work the mines.

By 1959, the population of Hashima peaked at 5,259, and the tiny island boasted a primary school, junior high school, playground, gymnasium, pinball parlor, movie theater, bars, restaurants, 25 different retail shops, hospital, hairdresser, Buddhist temple, Shinto shrine and even a brothel [source: Burke-Gaffney]. The island's decline began in the 1960s when petroleum replaced coal as Japan's main energy source, and the mine was ultimately closed on April 20, 1974. Though the island has been unoccupied since the Mitsubishi operation shut down, the buildings remain as an eerie reminder of the mine's prolific past.