by Clint Pumphrey
Prev NEXT
4 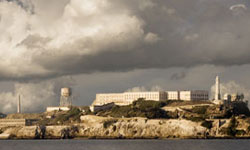 Few islands in the United States are as famous -- or infamous -- as Alcatraz, a small, rocky outpost in the middle of San Francisco Bay, Calif. Spanish explorer Lt. Juan Manuel de Ayala first mapped the island in 1775 and gave it the name "Isla de los Alcatraces" (Island of the Pelicans) because of the large number of the seabirds that roosted there. The rugged crag stood in the bay untouched until 1853, when the U.S. Army constructed a fortress on Alcatraz, which they used both for the defense of San Francisco Bay and as a prison. Then, in 1934, the Army transferred ownership of the island to the federal Bureau of Prisons, which converted the fortress into one of the most legendary penitentiaries in the country's history. The prison housed many violent murders and mobsters -- including Al Capone, Alvin Karpis, "Machine Gun" Kelly, Basil "The Owl" Banghart and Mickey Cohen -- before closing its doors in 1963.

The event that cemented Alcatraz's place in American popular culture was the occupation of the island by American Indians, most notably from Nov. 20, 1969, through June 11, 1971. This was the third and final occupation of the island by activists demanding the deed to the island and at the same time bringing attention to the struggles of the nation's American Indian population. While armed law enforcement forcibly removed the last of the protesters in 1971, their efforts played a key role in the eventual end of the United States' termination policy, which sought to assimilate Indians into mainstream American society.