by Clint Pumphrey
Prev NEXT
6 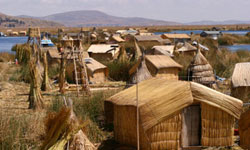 They may not technically be islands in the geographic sense, but the Floating Islands of Lake Titicaca are one of Peru's strangest attractions. Known by their inhabitants, the Uros, as Islas Flotantes, these "floating islands" are actually mats made of buoyant totora reeds, some of which are half the size of a football field! These mats measure 8 to 12 feet (3 to 4 meters) thick and are tethered to each other and the lake bottom with long ropes [source: Foer].

It's not entirely clear when and why the Uros settled in the middle of Lake Titicaca, but anthropologists believe that in pre-Columbian times they migrated out of the Amazon and into what is now southern Peru. At odds with rival tribes and unable to find land of their own, the Uros decided to make floating cities in the lake's frigid waters where they remained unmolested for centuries. Their reputation as an inferior and subhuman people kept them safe from Incan and Spanish subjugation, though unfortunately the local Aymara still view them as dim-witted.

The Uros lived about 9 miles into the lake until 1986, when a huge storm destroyed many of the islands and forced their residents to rebuild closer to shore. Incredibly, around 1,200 Uros still live on a string of some 60 floating islands off the coast of Lake Titicaca's largest city, Puno. Traditionally, the Uros were fisherman, but in recent years nearby commercial operations have made it difficult for them to make a living that way. Now the Uros are hoping to profit from the approximately 200,000 tourists who visit their islands each year [source: Foer].