by Clint Pumphrey
Prev NEXT
8 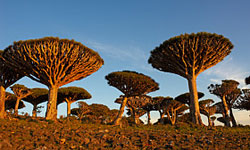 Rising from the Indian Ocean off the coasts of Yemen and Somalia is the Yemeni island of Socotra, a place that's just about as strange as its neighboring countries are violent. Dominated by the Haghier Mountains, which reach a height of 5,000 feet (1525 meters), the Socotran landscape is extremely arid and looks like something out of a Dr. Seuss book. The distinctive flora and fauna are a result of a high level of endemism on the island, which has been isolated since it broke off of Africa more than 250 million years ago [source: Edwards].

Among the 300 plants, 24 reptiles and six birds that are unique to Socotra is the dragon's blood tree, an odd plant that is named for its bright red sap [source: SCDP]. From this tree's thick central trunk, sturdy, gnarled branches fan out in a round umbrella shape and are topped with palm-like leaves. Another peculiar part of the island's flora is the Socotran desert rose, a beige plant with pink flowers that's best described as a giant rutabaga-like tree.

If it weren't for its unfortunate location in one of the world's most unstable regions, this 1,400-square-mile (3,625 square kilometers) "Galapagos of the East" would be an ideal destination for ecotourists from across the planet. However, until its home country becomes friendlier to foreigners, Socotra's 44,000 residents will be forced to endure the isolation that made the island so biologically unique in the first place [source: SCDP].