by Clint Pumphrey
Prev NEXT
9 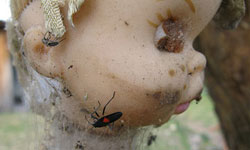 Some of the dolls were dredged from the water, and others were donated to the island by neighbors.
Alfred Muller/Flickr

Anyone who has seen one of the Chucky movies will agree: Dolls are creepy. This is especially true when they are hanging from trees, wrapped in spider webs, with bugs crawling out of their empty eye sockets. Are these the horrors of the latest Hollywood thriller? Actually, such scenes are what you can expect to see when visiting La Isla de las Munecas, or The Island of the Dolls, just outside of Mexico City.

The story behind this eerie place is just as bizarre as any tale that Tim Burton or M. Night Shyamalan might dream up. A grieving man named Don Julian came to live on the island in the canals of Xochimilco after the tragic deaths of his entire family. Then, one day he heard the distant screams of a young woman drowning in a nearby canal. He ran to the water's edge, leaped in, and pulled the girl to shore, but despite his brave efforts, she soon died. Alone again, Don Julian began to hear the girl's voice on a nightly basis, and in an attempt to ward off her spirit he began to hang dolls from the trees. Pretty soon he became a local legend, and people began to bring him more dolls to add to his collection. Don Julian died in 2005 at the age of eighty-six, but not before amassing a ghostly collection of dolls -- and parts of dolls -- numbering in the thousands.