by Clint Pumphrey
Prev NEXT
10 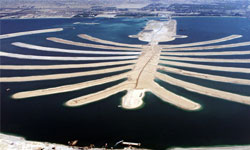 It makes sense that one of the strangest man-made islands in the world is located in Dubai, a city whose extravagance also includes an indoor ski hill and a 160-story skyscraper. Palm Jumeirah, an artificial archipelago off the coast of Dubai, boasts sixteen 0.62-mile-long (1 kilometers) fronds surrounded by a circular barrier island 6.8 miles (11 kilometers) long. It measures 3.1 miles (5 kilometers) from tip to mainland and is 12 square miles (31 square kilometers) in total area [source: The Daily Mail]. It was constructed in the Persian Gulf using boulders excavated from a nearby mountain range and more than 120 million cubic yards (92 million cubic meters) of sand dredged from the sea floor [source: Nakheel]. Commissioned by Sheikh Mohammed bin Rashid Al Maktoum and constructed by the state-owned developer Nakheel, Palm Jumeirah doubled the natural 42-mile (68 kilometers) coastline of Dubai [source: Booth].

Amazingly, Palm Jumeirah is just one of four artificial-island developments currently underway in Dubai. Nearly complete, Palm Jebel Ali will be more than twice the size of Palm Jumeirah, while the final development, Palm Deira, will be the largest of the three artificial islands. A fourth project called "The World" is a cluster of 300 islands grouped in the shape of a world map. Unfortunately, Dubai's 2008 debt crisis nearly brought construction to a halt and cast doubt on the future success of these developments.