by Jane McGrath
Prev NEXT
3 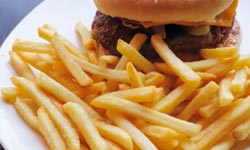 Fries go with almost anything on the road.
©iStockphoto.com/littleclie

You'd never guess it from looking at it, but the humble potato yields some of the tastiest, and profitable, snacks. Often a side-item for roadside sandwiches, french fries are easy and filling finger food for when you're on the go. They are deep-fried potatoes that have been cut lengthwise, topped with salt and usually eaten with ketchup.

Despite their name, historians don't think French fries had their origin in France, but rather Belgium (where they make up half of the national dish, along with mussels). The name probably came from the way they were cut -- long and thin. Or, some speculate U.S. soldiers eating them for the first time in Belgium during World War I mistook the French-speaking Belgians for French.

Somewhat surprisingly, the baked potato is now a popular street vendor food in New York City. Customers like to load it with butter, cheese, sour cream, chives or even chili.