by Jane McGrath
Prev NEXT
7

An American Staple: the Hot Dog 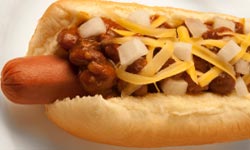 Street vendors in different cities have their own take on the hot dog.
©iStockphoto.com/Pixhook

Because so many foods were brought over or perfected by newly assimilated immigrants, it's hard to classify many food items as authentically American. The hot dog is one of these disputed foods.

The hot dog, in all its simplicity as a sausage on a bun, has captured the hearts of Americans since the 1860s. They can be served with all the trappings of ketchup, mustard, relish and onions. Others prefer sauerkraut and even chili on their dogs.

Making them closely associated with another American pastime, hot dogs are sold in the stands during baseball games. And, of course, they are perhaps the most common food sold from street vendor carts across America. Street vending, in fact, is probably where the American hot dog got its origin, when Coney Island vendor Charles Feltman started selling sausages on buns [source: Smith].

Although Americans like to claim it as their own, the hot dog is a clear descendant of the sausages from Eastern Europe. Consider, for instance, the hot dog's German-sounding alias "frankfurter." Whether putting it on a bun qualifies Americans as the true inventors is a matter I'll leave to you, dear reader, to decide.