Browse the article 10 Places on Earth That Look Completely Alien 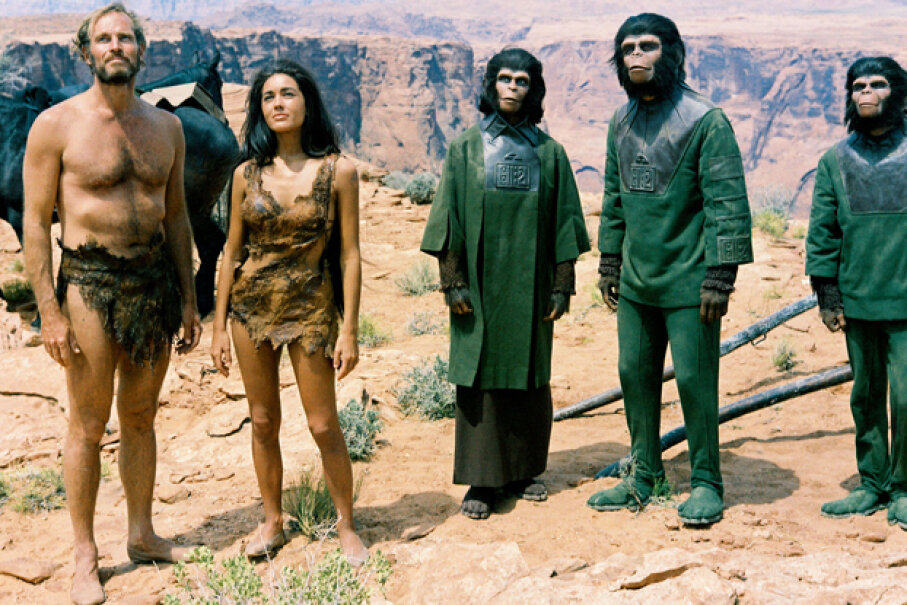 Much of "Planets of the Apes" was filmed in the desert-like area of Page, Ariz., and in Red Rock Canyon State Park, Calif. Otherworldly indeed. See more movie-making pictures. Silver Screen Collection/Getty Images

One of the most famous scenes in science fiction cinema comes at the end of the 1968 hit "Planet of the Apes." Astronaut George Taylor, after traveling in space for 2,000 years, apparently has landed on an alien planet ruled by intelligent apes that are determined to exterminate the planet's primitive human population.

Taylor manages to free himself and an indigenous female companion from captivity and decides to ride off on horseback to explore the planet's so-called nuclear war-ravaged forbidden zone, despite warnings from ape elder Dr. Zaius that he won't like what he will find. Taylor and his partner struggle to cross a harsh, otherworldly looking landscape, full of deep, startlingly hued canyons, until they finally reach a shoreline. That's where Taylor finds the half-buried Statue of Liberty and realizes that he's not on a distant planet after all, but a future version of Earth.

A cynical moviegoer might wonder in retrospect why it took Taylor so long to realize that he actually was back on his own planet, since it had a breathable atmosphere, a hospitable climate, and vegetation and animals such as horses that he'd seen before. But the filmmakers managed to make Taylor's cluelessness believable, by putting him in a place that an unwary person easily could mistake for an alien world. Much of the Forbidden Zone, for example, actually was Red Rock Canyon State Park in California, where the towering, red-tinted rock formations look as if they belong on Mars [source: Russo et al.].

And Red Rock is just one of many places on Earth that are so strange-looking that they seem as if they ought to be on some other planet. Here are 10 of the most alien-looking locations right here on Earth. 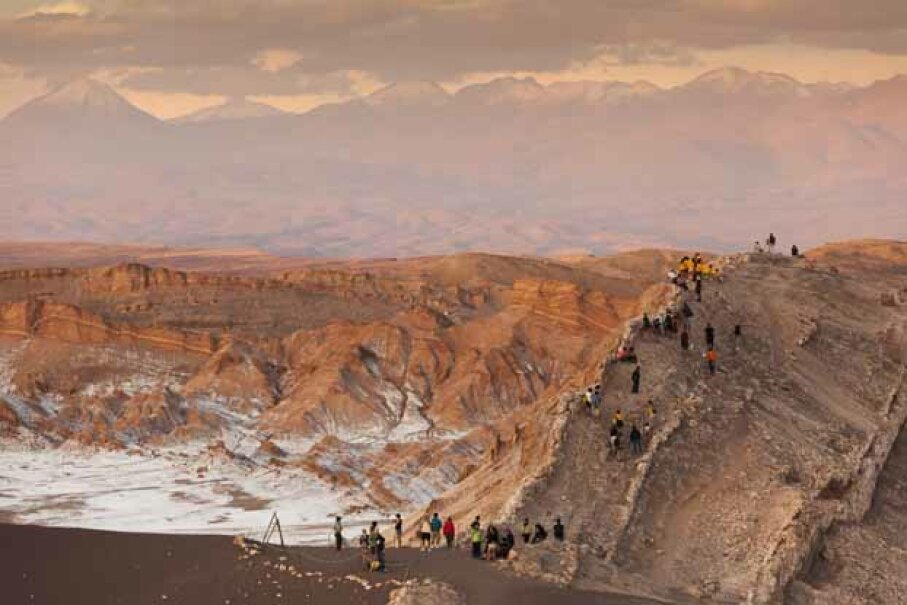 The Atacama, which stretches 600 miles (1,000 kilometers) from Peru's southern border into northern Chile, is what climatologists describe as an absolute desert. It is filled with sterile, bone-dry stretches where rain has never been recorded for as long as humans have been measuring the weather. As a result, much of this parched area is totally devoid of vegetation [source: Vesilind].

With features such as sand dunes and lava flows, it's not hard to imagine the Atacama as being similar to the landscape that robotic probes — and someday, astronauts — would find on Mars. That's one reason that NASA has used the Chilean desert as a test site. In 2005, for example, a NASA probe detected microbial life in the Atacama's seemingly barren soil, as scientists are hopeful that they'll also be able to do on Mars [source: NASA].

Craters of the Moon National Monument and Preserve, Idaho 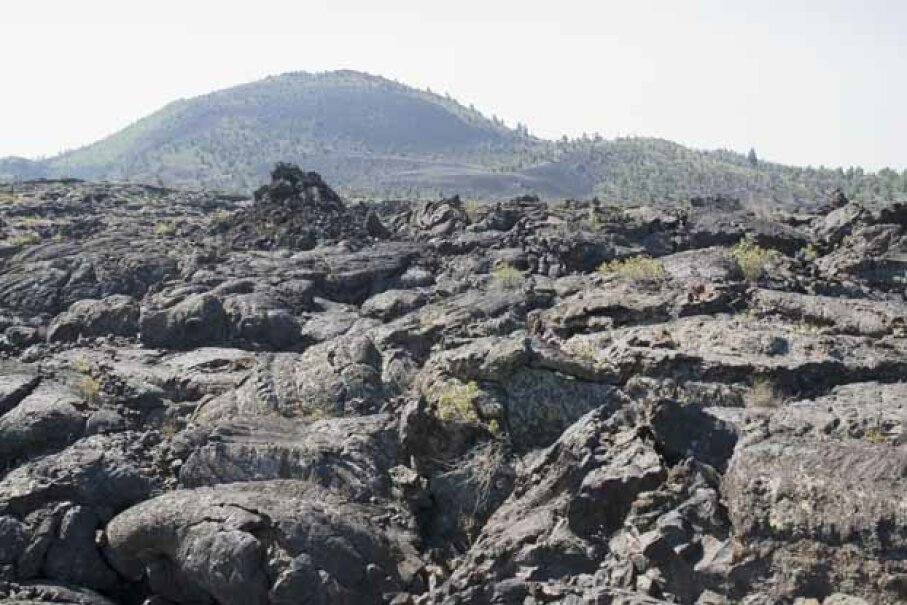 Craters of the Moon is an apt name for this preserve -- it certainly looks like a lunar landscape. jerryhopman/iStock/Thinkstock

This 618-square-mile (1,600-square-kilometer) region bears an eerie resemblance to the meteor-battered lunar surface. Actually, though, its scarred landscape is the result of the stretching movement of Earth's crust over the past 30 million years. As the crust stretches, it releases pressure on to the hot rocks below, causing them to melt. The hot magma then flows along weaknesses in the surface and results in multiple periods of volcanic activity, the most recent one about 2,000 years ago.

During that eruption, lava burst from the Great Rift, a series of deep cracks that stretch for 52 miles (84 kilometers). The Craters of the Moon continues to be volatile, and scientists predict that it will experience future eruptions that will alter its surface [source: National Parks Service]. 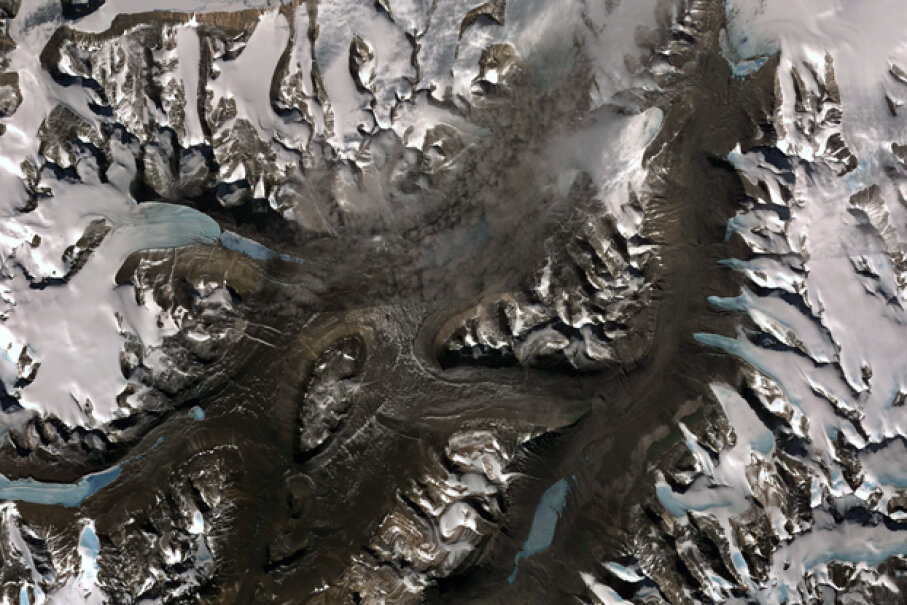 Scientists like the Dry Valleys because the lack of ice makes it easier for them to study the geological processes affecting Antarctica. Universal History Archive/UIG via Getty Images

The largest ice-free region in Antarctica is a windswept, frozen desert whose rugged terrain looks as if it belongs on Pluto rather than our planet. Covering 9,300 square miles (15,000 square kilometers), its valleys were carved by glaciers that long ago retreated, leaving in their wake a broken layer of boulders, gravel and pebbles, all of which have been worn down by the harsh weather and sorted by the strong winds.

The surface contains deposits of marine sediments, in addition to sand dunes and ash, and covers a layer of soil that's millions of years old. Scientists like the Dry Valleys because the lack of ice makes it easier for them to get a look at the current geological processes affecting Antarctica [source: McMurdo]. 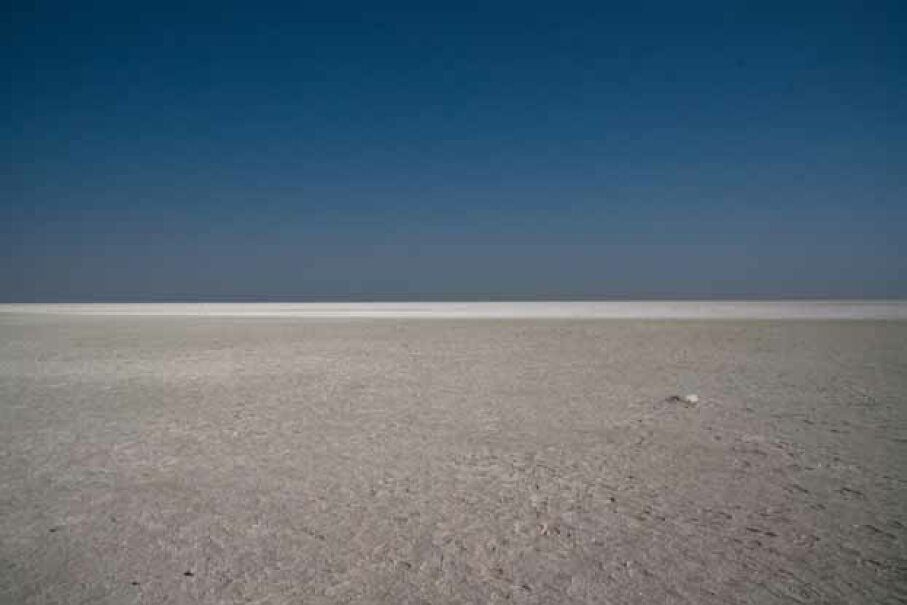 The Etosha Pan is the largest salt pan in Africa and is even visible from space. Romulo Rejon/Flckr/Getty Images

When scientists studied images shot by the Cassini space probe of Ontario Lacus, a massive lake on Saturn's moon Titan, they discovered that it was a depression that drains and refills from below, at low ebb exposing liquid areas ringed by materials such as saturated sand and mudflats. If you get past the fact that it is filled with liquid hydrocarbons, Ontario Lacus bears an eerie resemblance to a place back on Earth — Namibia's Etosha Salt Pan [source: NASA].

This dried lake bed fills with a shallow layer of fluid from groundwater during the rainy season; the fluid evaporates during the dry season, leaving sediment marks. Etosha, whose name means "great white place" in the language of the Ovambo people, is a 1,800 square-mile (4,800 square-kilometer)expanse of shimmering, dry, baked clay that looks suitably otherworldly [source: Etosha National Park]. 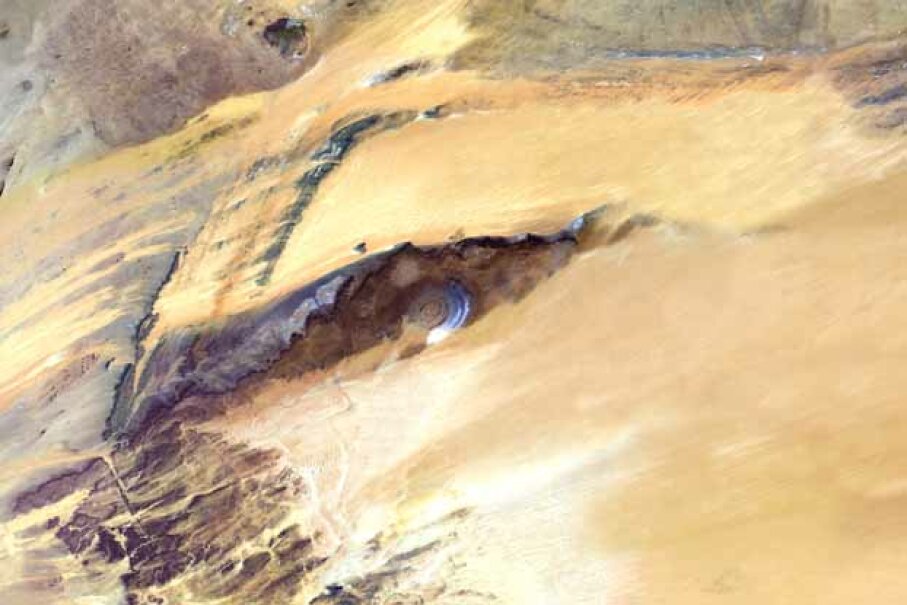 This satellite image shows the Richat Structure. Although it resembles an impact crater, the Richat Structure formed when a volcanic dome hardened and gradually eroded, exposing the onion-like layers of rock. Planet Observer/Universal Images Group via Getty Images

You've probably seen pictures of Jupiter's mysterious Great Red Spot which actually is a gigantic storm about two to three times the size of our entire planet [source: Choi]. But when viewed from space, Earth has a similarly strange-looking surface feature.

The Richat Structure in Mauritania is a gigantic circular swirl, about 30 miles (50 kilometers) in diameter, that forms a bull's-eye in an otherwise featureless expanse of west African desert. When astronauts first noticed the Richat Structure in the 1960s, it was believed to be a crater left behind by an immense meteor, because of the uniformity of its curves. But scientists now think that it's a rock formation of Paleozoic quartzites, laid bare by erosion [source: NASA]. Either way, though, it's plenty strange looking. 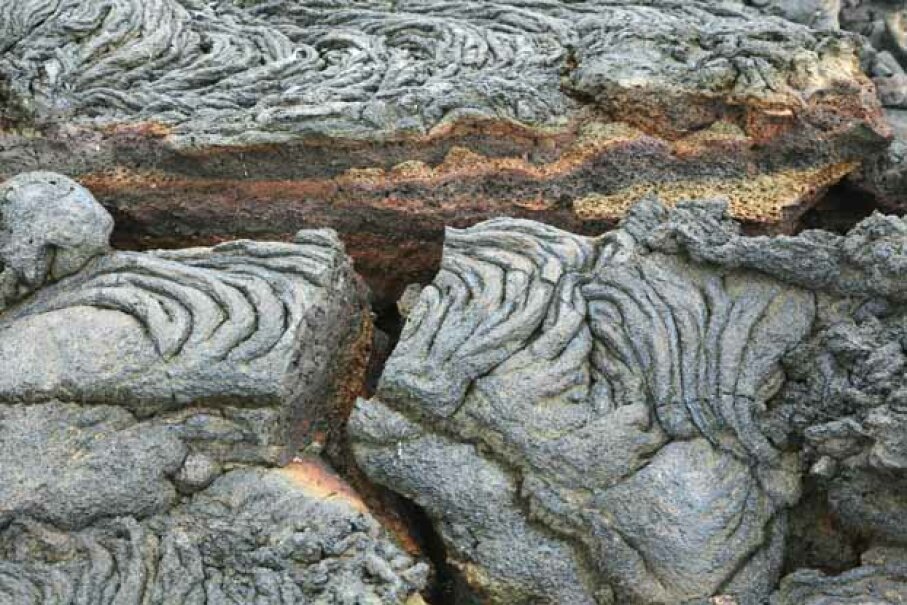 The strangest, most seemingly alien place on Earth, at least to surface dwellers such as humans, has to be the deep ocean. Back in the mid-1970s, scientists discovered a particularly strange spot — the hydrothermal vents that penetrate a mile-and-a-half (2 kilometers) into the ocean floor near the Galapagos Islands in the South Pacific.

Inside the vents, water heated by volcanic activity sometimes reaches 750 degrees Fahrenheit (400 degrees Celsius), thanks to the intense pressure from the water above that keeps it from boiling away. That hot water dissolves metals and salts as it moves along rocks, eventually rising and pouring out into the bitter cold, pitch-black darkness. The vents also spout hydrogen sulfide, a gas which is poisonous to most land-based life. Even so, the vents are home to bacteria, which have evolved to use the seeming poison as an energy source. Scientists think these microbes may closely resemble the earliest life-forms in Earth's oceans [source: Trivedi]. 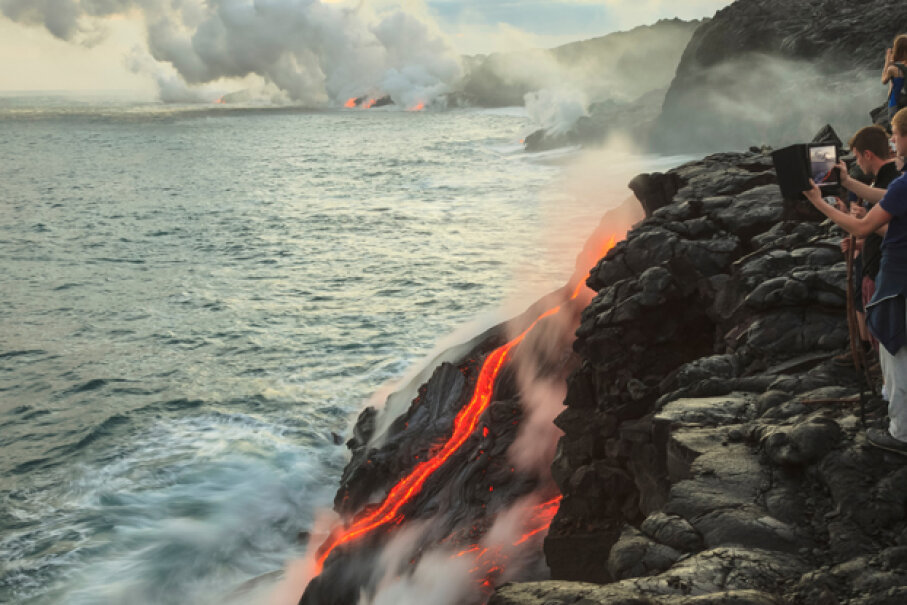 The lava flow from the Kilauea volcano makes for an excellent picture. Cultura RM/Stuart Westmorland/Getty Images

Venus, the second-closest planet to the sun, is home to more volcanoes than anywhere else in the solar system, and its landscape is composed largely of plains of basalt, a type of rock formed by their lava flow.

The closest thing on Earth to a Venusian environment, oddly, may be the slick, black basalt formations on Hawaii's Big Island [source: Mother Nature News]. One of the best examples of a Venus-like volcano is Kilauea, the youngest and southernmost volcano on the island, and one of the world's most active. Since 1952, there have been more than 34 eruptions at Kilauea, which in Hawaiian tradition is the home of Pele, the volcano goddess [source: USGS]. 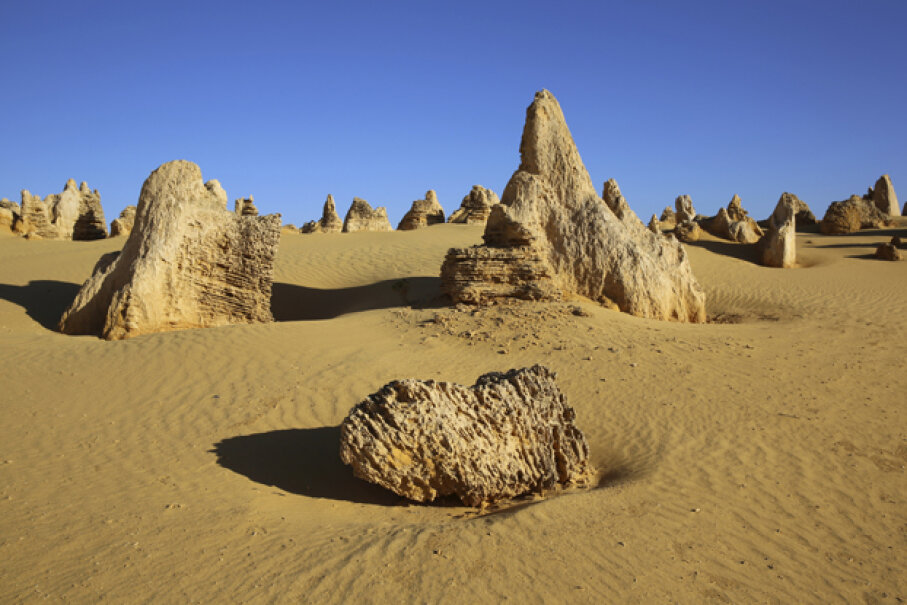 The alien-looking spires of The Pinnacles were formed from limestone worn down by rain, sun and wind over millions of years. Bernhard Richter/iStock/Thinkstock

Even if you were an artist painting a cover picture for some pulp science fiction novel, you probably wouldn't envision an alien landscape that looks weirder than The Pinnacles.

This stretch of desert landscape in Australia's Nambung National Park boasts thousands of weathered rock projections that rise out of yellow sand dunes — some topped by domes, while others form jagged, sharp-edged columns [source: Australia.com]. The spires, some of which reach 11 feet (3.5 meters) in height, are limestone formations sculpted by wind, vegetation, rain, sun and time over millions of years [source: National Geographic Traveler]. 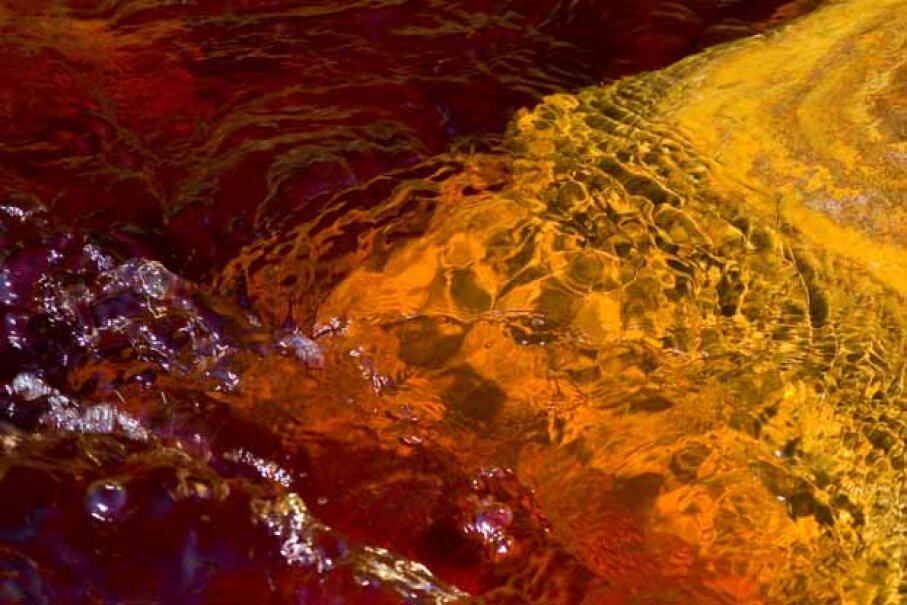 The Rio Tinto gets its reddish color from the iron present in its water; scientists have studied its ecosystem because of its similarities to the planet Mars. demarfa/iStock/Thinkstock

Spain's Rio Tinto river conjures up images of what a river might look like on some alien world that future astronauts had turned into a mining colony.

For thousands of years, generations of miners have dug shafts into the local soil in pursuit of mineral wealth. The Romans fashioned some of their first coins from the Rio Tinto area's gold and silver, and today, the area is one of the most important sources of copper and sulfur on the planet.

But the pollution runoff from thousands of years of mineral extraction has taken its toll upon the river, whose waters have turned deep red due to high acidity, heavy metals and bacteria that oxidize iron and sulfur — life-forms akin to what scientists hope they will find on distant worlds such as Mars or Jupiter's moon Europa [source: Bordenstein]. 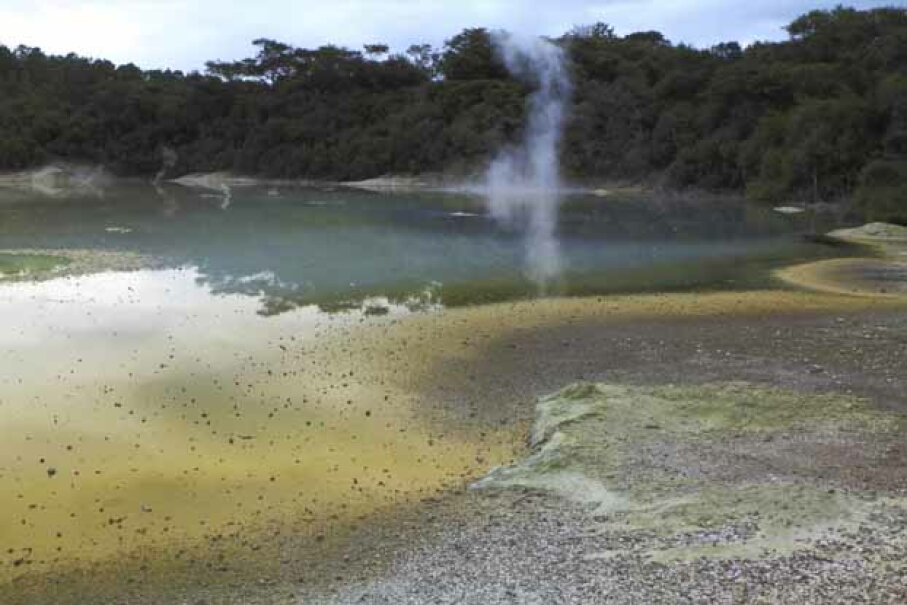 Imagine a harsh, inhospitable alien world where the surface is bubbling and contains bright orange and yellow swaths enshrouded in sublimely steamy mists. That should give you a pretty good picture of Waiotapu (sometimes rendered as Wai-O-Tapu), a thermal area of about 11 square miles (18 square kilometers) in New Zealand.

Steam and gases rising through the pool create bubbles of mud, at the site of what was once a volcano. While Waiotapu is a popular tourist spot, visitors are warned to stay on government-erected walkways, lest they fall through thin crust surfaces and risk being burned by hot geothermal gases or fluids, and inhaling possibly fatal concentrations of carbon dioxide and sulfur [source: New Zealand Department of Conservation].

When I was young, I enthusiastically devoured a series of juvenile science fiction novels about a team of future space cadets led by the intrepid Tom Corbett. The depictions of other planets in the books bore little resemblance to reality — Venus, for example, was a hot and humid but otherwise Earth-like environment. But those books started me pondering about what other places in the cosmos must look like, and I've been thinking about that ever since. That curiosity made this assignment even more interesting for me, because I could at last see places on Earth that were comparable to the worlds conjured by my imagination.