by Christine Venzon
Prev NEXT
6 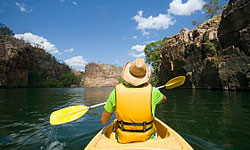 Like a string of Australian opals, Katherine Gorge is a continuous strand -- 13 separate gorges stretched over 8 miles (13-kilometers), carved through layers of sandstone by the Katherine River. The gorges are divided by rock bars on the river bed. Don't let them stop you, however. Like Australia's chocolate-coated Lamington cake, Katherine Gorge gets better as you dig into it.

Katherine Gorge is located in Nitmiluk National Park, in Australia's Northern Territory. Nitmiluk itself is unusual, in that it's owned by its Aboriginal inhabitants, the Jawoyn, and run with respect for their law.

The first three gorges are easily accessible. Touring them makes a full day trip for most people. To reach successive gorges requires a portage -- hauling the canoe along the shore, due to the rocks and the rapids. Longer forays also entail camping on the riverbank. Campsites with toilets are available up to the ninth gorge. Visitors can catch Barramundi, a gamefish, and cook them over a camp stove.

However far you make it, you'll be rewarded with the dramatic beauty that has made the Australian outback famous. Craggy gray sandstone walls rise like an unfinished cathedral, draped here and there with hanging gardens. Red-flowered mangrove trees dot the banks. Kingfishers, cormorants and other waterfowl skim the surface of the river, snatching up prey. Just below the crystalline waters you might see snake-necked turtles, yellow-spotted water monitors and the occasional freshwater crocodile. According to Jawoyn legend, Bulong, the rainbow serpent, a mythical figure, also lives here.