by Christine Venzon
Prev NEXT
8 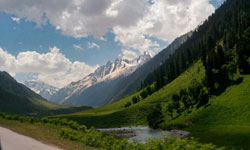 Located on India's border with Pakistan, the state of Kashmir may be best known these days for sectarian violence between those two countries. But its reputation for natural beauty goes back centuries, and it offers some of the most tranquil scenery in the Indian subcontinent.

Two destinations stand out for canoeists. One is Dal Lake, a centerpiece of Kashmir's summer capital, Srinagar. Lotus flowers and water lilies grow along its 10-mile (16-kilometer) shoreline, and residents' vegetable gardens dot the waters. Hindu temples are visible on the hills overlooking the banks.

A second stop is Sonamarg, or "Golden Meadow." This popular resort sits in the Himalayas northeast of Srinagar at nearly 9,000 feet (2,740 meters). In the summer, it boasts placid lakes surrounded by meadows cloaked in wildflowers, a stunning contrast to the rim of pine tree forest and towering snow-capped mountains in the background. Yet you can get a taste of winter with a ride to Thajiwas Glacier on a sturdy mountain pony.

For a true test of canoeing skills, however, Kashmir and the rest of India have taken to a new sport: canoe polo. The game is similar to the equestrian version, with canoes replacing horses, paddles replacing mallets, and an Olympic-sized pool replacing the grassy field. The Kashmiri team did well in the 2012 national championship, collecting two silver medals despite playing with rented paddles and donated helmets designed for rock climbing.