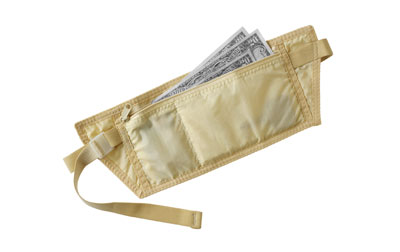 A money belt that fits under your clothes keeps your cash safe and sound.
C Squared Studios/Getty Images

Having a ­good money plan ahead of time can save you money in the long run. There isn't a set formula for how much cash to bring onboard. Find out how the ship operates. Some ships are sign and pay later. Some include a master tip fee at the end of the cruise. Other ships prefer you tip in cash as you go. Check in with the cruise line to get the specifics. As far as ports go, whether or not most businesses will take your country's currency really depends on where you're going and what country you're from. If you're from the United States and you're traveling in the Caribbean, you can typically just bring your American dollars. If you're from Japan and you're on a Norwegian cruise, you'll need to exchange your money.

Don't go overboard (excuse the pun) with the cash, though. You don't want to have all your spending money in easily-stolen large bills. If you insist on taking some cash, break it into smaller bills before you board. But cash is risky, so take the time to get traveler's checks before you depart. American Express offers fully insured checks and round-the-clock customer support. Most ports take credit these days too. Avoid bringing all of your cards, in case your wallet or purse is lost or stolen. Choose one with plenty of spending room on it that has good customer support, and use it exclusively if you can.