by Christie Mattheson
Prev NEXT
1 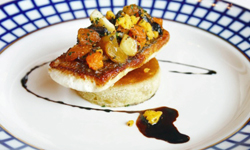 Whatever the local delicacy is, it's likely to taste better on its home turf than it would in a foreign translation.
iStockphoto/Thinkstock

Every culture creates its own dishes that feature the unique combination of foods available in the area. Of course, there are far too many exquisite dishes to list here. A local specialty might be a humble, homey recipe from a tiny mountain village or street food from a crowded city. Whatever the natives eat, and eat often, you should try. It's going to taste dramatically different in Sweden than it does in Vietnam or South Africa or Bhutan. And even if the locale isn't quite so exotic, the cuisine might be -- to you. Different regions (and states, and cities, and tiny towns) in the United States have time-honored cuisines that you'd be remiss to skip -- like coffee with chicory when you're in New Orleans. Or crab in the Pacific Northwest. Wherever you travel, try eating like a local for at least one meal. You'll be glad you did.

For more on haute cuisine and hitting the road, take a look at the links below.