by Linda Bryant
Prev NEXT
2 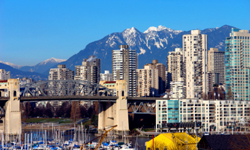 Vancouver's climate and scenery make it a prime choice of location for filmmakers.
Hemera/Thinkstock

Vancouver has a lot going for it -- breathtaking scenery, a temperate climate, and a thriving film production industry that pumps more than $1 billion a year into the local economy [source: British Columbia Film Commission]. The city is often called "Hollywood North" because it's such an intricate beehive of moviemaking activities. It's now the third-largest film production center in North America and the second-largest location for television production outside of Los Angeles. Over a period of about 15 years, more than 2,000 films and TV shows have been shot in Vancouver, including "The X-Files," "Juno," "Stargate SG-5," "Men in Trees" and "Romeo Must Die."

There's a lot to choose from when it comes to enjoying Vancouver's film and television scene [source: Hellobc.com]. Tours range from customized jaunts to multi-day excursions. Some tour companies will even pick you up in a limousine. There are several large movie studios in the region, some of which are included on guided tours. Visitors can see working sets from hit TV shows such as "Smallville" and "Supernatural" by signing up for guided tours. The recent vampire blockbuster, "Twilight," was partially filmed in Vancouver. As result, there's a huge demand for "Twilight"-related tours, and there's certainly no shortage of them. It's often worth it to hire a tour guide in Vancouver -- guides are typically up-to-date on interesting trivia related to all the various productions and movie stars.