by Linda Bryant
Prev NEXT
6 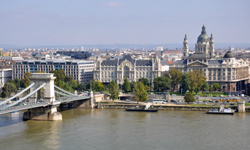 Budapest is an affordable place to make a film, and its buildings can stand in for many European locations.
iStockphoto/Thinkstock

One of the hottest film location sites of the past decade is Budapest, Hungary. Filmmakers flock to the city because of its central Eastern Europe location, low cost of labor and deep government discounts on production. Another unique characteristic of Budapest: Its streets and storefronts can easily be made to look like scenes in London, Paris and Moscow. Veteran film producer Denise Di Novi, who is co-producing the upcoming movie "Monte Carlo" with Academy Award-winning actress Nicole Kidman, told The New York Times in July 2010 that filming the movie in Budapest, instead of Paris, trimmed millions off the film's budget [source: Bilefsky]. Films made in Budapest include "Dinotopia," "An American Rhapsody" and Steven Spielberg's "Munich."

Although there are few options for formal movie location touring, it's easy to strike out on your own with a guidebook and a little knowledge of films made in the city.