by Linda Bryant
Prev NEXT
7 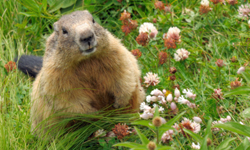 The 1994 movie "Groundhog Day" was shot in Woodstock, Ill., and still draws movie fans who want to see the town.
iStockphoto/Thinkstock

Sometimes a sleeper of a movie manages to carve out a spot in the public's psyche. That's what happened with "Groundhog Day," the 1994 comedy starring Bill Murray and Andie McDowell. The film was a critical and box office success when it was released in 1994. But the magic of the movie didn't stop there. It has remained enduringly popular among all age groups, not unlike iconic film favorites such as "It's a Wonderful Life."

Some of the magic rubbed off on Woodstock, Ill., the Midwestern town of about 25,000 where most of "Groundhog Day" was filmed. Woodstock, about 50 miles (80.5 kilometers) from Chicago, is now a destination for tourists and movie buffs who love the movie's message of second chances and redemption. Woodstock's stores, cafes, parks and public buildings offer an especially strong sense of place for those familiar with the movie.

At the beginning of every February, Woodstock presents its annual Groundhog Day Festival. You can catch a free showing of the movie at the local theater, take a guided walking tour or join in on in-depth discussions about life lessons in the movie at symposium hosted by a film enthusiast. If you can't make it to the annual festival, a detailed walking tour map of the historic square can be downloaded at the city's Web site.