by Linda Bryant
Prev NEXT
8 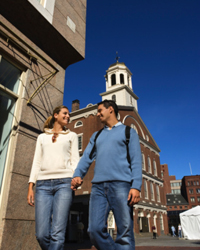 Walking may be the easiest way to see famous movie locations in Boston.
Jupiterimages/Comstock/Getty Images/Thinkstock

Boston is one of the oldest cities in the United States, best known for its diverse neighborhoods, historical events connected to the American Revolution, and top-notch schools such as Harvard University and Boston College. It's also a longtime favorite of filmmakers. More than 400 movies have been filmed in Boston, including classics such as "The Verdict" and "The Thomas Crown Affair," and more recent award winners such as "Mystic River," "The Departed" and "Good Will Hunting." Boston is equally popular as a setting for TV shows. "Cheers," "Ally McBeal" and "The Practice" were filmed in Bean Town.

An array of sights and destinations attract tourists to Boston -- from Fenway Park to Harvard Square. It's not easy to get around by car in this fast-paced metropolis. It's one movie town where a planned walking or bus tour makes a lot of sense. There's Theater-on-Wheels, a 2-1/2 hour tour of movie and television filming sites, and the Movie Mile, a two-hour guided walking tour of more than a dozen locations from well-known films and shows such as "The Parent Trap," "The Last Detail," "Cheers," "Malice" and "Spenser: For Hire."