by Linda Bryant
Prev NEXT
9 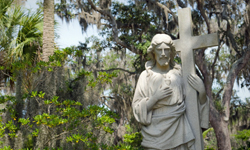 Bonaventure Cemetery in Savannah, Ga., plays a prominent role in "Midnight in the Garden of Good and Evil."
iStockphoto/Thinkstock

Filmmakers can't resist the allure of Savannah. It's a drop-dead gorgeous place. This soulful city on Georgia's Atlantic coast blends traditional Southern charm with free-spirited eccentricity. More than 80 movies and TV shows have been filmed in Savannah, including "Midnight in the Garden of Good and Evil," "Forrest Gump," "Something to Talk About" and "Ruby," the hit reality show on the Style Channel.

There are several movie tour options in Savannah, and virtually every one offers glimpses of filming locations from "Midnight in the Garden of Good and Evil." The non-fiction book -- and subsequent 1997 movie starring Kevin Spacey -- created legions of fans, and many of them express their devotion by making a pilgrimage to Savannah. Whatever you do, don't miss out on seeing the hauntingly beautiful Bonaventure Cemetery, one of the centerpieces of the book and movie.

Other highlights of moviemaking history in Savannah include the famous park bench from the 1994 blockbuster "Forrest Gump," which is now housed in a museum, and the Six Pence Pub, a downtown bar and eatery where portions of the romantic comedy "Something to Talk About" were filmed in 1994. Savannah is rated as one of the 10 best walking cities in the country by Walking Magazine. It's no wonder that movie tours centered on walking are popular tourists' choices.

Here's a word to the wise about Savannah: Not only is it hot and humid in the summer; it's also vulnerable to hurricanes. Although summertime is a traditional time to take a trip, there are fewer crowds and mild weather in the Savannah during the fall, winter and spring, making it a great place to plan an "off-season" vacation.