by Linda Bryant
Prev NEXT
10 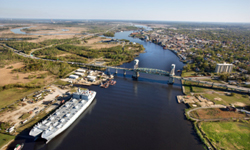 Producer Frank Capra Jr. put Wilmington on the moviemaking map in 1983 when he filmed a portion of the horror film "Firestarter" on an old rice plantation near the outskirts of town. Capra's discovery sparked a fire of its own. The picturesque coastal city of about 90,000 -- often called "Wilmywood" or "Hollywood East" -- quickly emerged as a major force in movie production [source: Little]. More than 300 movies and TV shows have been filmed in Wilmington, including "A Walk to Remember," "Weekend at Bernie's," "Nights in Rodanthe," "Cape Fear," "Matlock," "Dawson's Creek" and "One Tree Hill." Film-related activities now make up more than 11 percent of the local economy [source: Colin].

Because of its mild climate, ocean views and rich history, Wilmington already has a lot going for it as a vacation spot. Add tours of the area's largest movie studios and filming locations to the mix, and you've got a one-of-a-kind getaway. Popular pre-planned tours include the 90-minute Hollywood Location Walk of Old Wilmington and the EUE/Screen Gems Studios tour. However, it's easy to explore Wilmington without a tour guide. All you need is a good map and an adventurous attitude. To avoid crowds, consider visiting in the fall or early spring.