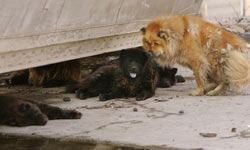 Pet dogs lie listlessly under an overturned truck near a pool of contaminated water a week after Hurricane Katrina hit New Orleans. Many house pets were abandoned to live on their own after the disaster. See more pet pictures.
Chris Hondros/Getty Images

Hurricanes, tornadoes, floods: Unless you've got a crystal ball handy, it's probably going to be tough to predict when a natural disaster is going to strike. However, that doesn't mean you can't be prepared for when Mother Nature does indeed decide to make a spontaneous, aggressive visit. If you're a pet owner, taking your four-legged friends into consideration should be an integral part of creating an emergency game plan.

Consider the impact of recent disasters such as Hurricane Katrina. More than 250,000 pets, including cats, dogs and fish, were left stranded by this storm and the subsequent flooding by owners who thought they would have returned in a few days but were unable to do so.

It's a staggering number, and one that should motivate pet parents to think ahead. Let's look at some of the precautions that can be taken in advance, as well as what to do when time is truly nonexistent and spur-of-the-moment decisions must be made.