by Joy H. Montgomery
Prev NEXT
9 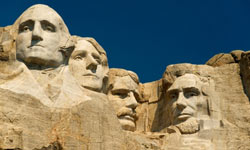 This slice of American history may not seem controversial -- unless you're Native American.
© iStockphoto.com/JayKay57

Way up in the hills of South Dakota is a massive monument honoring four of the United States' most influential presidents. At first glance, this homage to American history doesn't appear controversial, but many Native Americans, who consider the land a holy place, would disagree. The U.S. government promised the land in perpetuity to the Lakota Sioux tribe in 1868, but took it back years later during the Gold Rush. Then, in 1927, the government approved what is now the Mount Rushmore monument. That move added insult to injury for the Sioux tribe, which felt the government was not only taking over its land, but desecrating it, too. In response, the Lakota Sioux tribe began carving an even bigger monument about 20 miles (32.2 kilometers) from Mount Rushmore to memorialize Crazy Horse -- a Lakota warrior -- in 1948. This monument is not without its own critics, who believe it desecrates sacred land; plus, there were reportedly no photographs ever taken of Crazy Horse, and many question the authenticity of the sculpture. Nevertheless, construction continues.