by Joy H. Montgomery
Prev NEXT
10 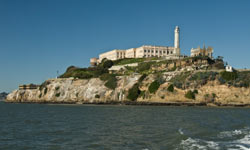 The penitentiary is only one part of Alcatraz Island's history.
© iStockphoto.com/DHuss

One of the world's most infamous prisons -- touted as inescapable -- is located in the middle of San Francisco Bay, but the penitentiary is only one part of the island's history. After operating for 29 years as the United States' first maximum-security prison and drawing public fascination thanks to notorious inmates like Al Capone, the prison closed. The island then sat empty for more than six years until a group of Native Americans tried to claim the land in 1969. After they'd lived on Alcatraz Island for 18 months, federal marshals removed them, but many still consider the occupation a pivotal moment in the American Indian movement because of the national attention it brought to the cause.

With such a storied past, it's easy to understand why Alcatraz Island remains fascinating to thousands of tourists who flock to the island each year to get a look at Capone's cell, Native American graffiti and many other features, including a bird sanctuary and the West Coast's first lighthouse.