by Colleen Cancio
Prev NEXT
7 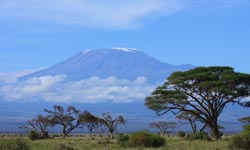 Mount Kilimanjaro stands in the background of the Tanzanian savanna.
iStockphoto/Thinkstock

There is something special about volcanoes, even dormant ones. Most of us are well aware that life is fleeting. Volcanoes remind us that the ground under our feet is also temporary – vulnerable to the moody eruptions brimming beneath the surface of the earth.

What's wonderful about Mount Kilimanjaro is that anyone can climb it. Well, almost anyone. Known as "Everyman's Everest," its slope is gentle enough to conquer with nothing more than a walking stick and a whole lot of determination, though reaching the summit is generally reserved for expert climbers. The amount of time it takes to reach the peak of Kilimanjaro depends on many factors, including your fitness level and the route you choose. Most trekking organizers recommend about eight days to summit and back, which allows time to acclimatize to the high altitude [source: Ultimate Kilimanjaro].

After your Kilimanjaro climb, you'll be basking in the glow of its awesomeness, but don't forget that you're in an outdoor paradise. No trip to Mount Kilimanjaro is complete without a Tanzanian safari experience, where you'll see cheetahs, leopards, lions and elephants in their natural habitat [source: Tanzania Adventure].