by Colleen Cancio
Prev NEXT
8 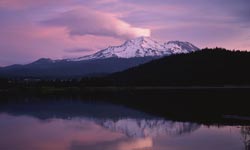 California is an adventurer's paradise, and Mount Shasta is its pinnacle. Though not quite the highest peak in the state (that honor goes to Mount Whitney), Mount Shasta offers a breathtakingly beautiful climb that involves a high and rapid ascent and a lot of hard climbing work. It rises up to 14,161 feet (4,316 meters) like a great white cone-shaped monument dwarfing the surrounding mountains by at least 5,000 feet (1,524 meters) [source: U.S. Geological Survey; Summit Post]. It also has five glaciers, including the Whitney Glacier, the largest in California [source: U.S. Geological Survey].

Whether you choose to conquer Mount Shasta from the north or south face, this is going to be a snowy climb lasting at least two or three days [source: Shasta Guides]. Either way, these trips are considered quite strenuous, requiring helmets, crampons, ice axes, and other ice and snow tools in addition to regular climbing ropes and harnesses.

If you're able to summit the peak of the Mount Shasta, you'll be rewarded with stunning views of California's Cascade Range. You'll also be able to take advantage of all that the Cascades have to offer on an adventure tour, including backpacking, hiking and some of the best backcountry skiing in the world [source: Shasta Guides]. You could also climb Mount Eddy, the highest peak in the nearby Klamath Mountains, where you can treat yourself to a swim in the Dead Fall Lakes, a series of pristine alpine lakes ringed by mountain peaks and from which you can see Mount Shasta [source: Shasta Home].