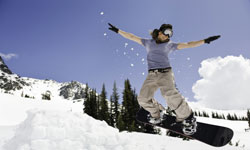 Snowboarding is one of fastest growing winter sports. In the 2006 to 2007 season, about 55 million people visited a ski or snowboarding area, and 28 percent of ski-area visitors were snowboarders [source: Snowboarding Statistics]. Additionally, snowboarders made up almost half of the ski-resort population in the American West in 2002 [source: Lee].

What factors should you consider when deciding on the perfect location to experience this fast-paced and popular sport? If you're a freerider, you'll be interest in "the freshies," the untouched white stuff most prevalent in the backcountry of the West. If you're a freestyler, you'll be interested in terrain parks where there's room to practice your rails, jibs, jumps and other snowboarding maneuvers. Carvers prefer fast, groomed, and well-marked land where you can sweep along the the mountain.

The following sweet spots for snowboarding will suit a variety of boarders with all experience levels.