Top 10 Most Beautiful Drives in the United States 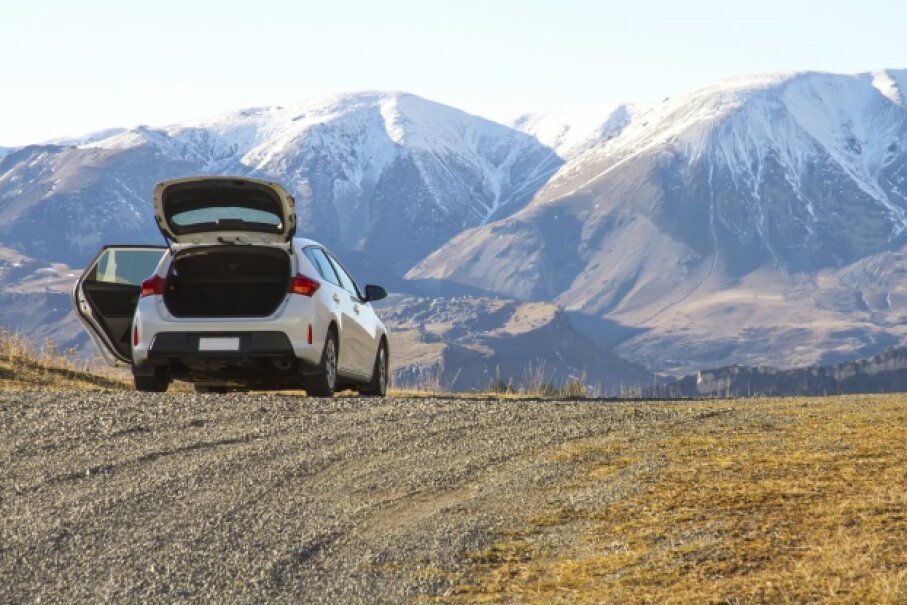 These drives are beautiful, but you may need to pull over to really soak in the views. thegiffary/iStock/Thinkstock

The road trip: Hopping in the car, filling up the tank, cranking the tunes and hitting the open road. It's an American tradition -- head out on the highway, looking for adventure (and whatever comes your way).

Maybe you're ready for a nice drive, but you don't know where to go. We've compiled a list of 10 of the most beautiful and scenic drives in the United States. We'll take you from Hawaii to Alaska and many places in between. Each trip features scenery from some of the most visually stunning areas of the country, so don't forget to bring your camera. Let's hit the road! 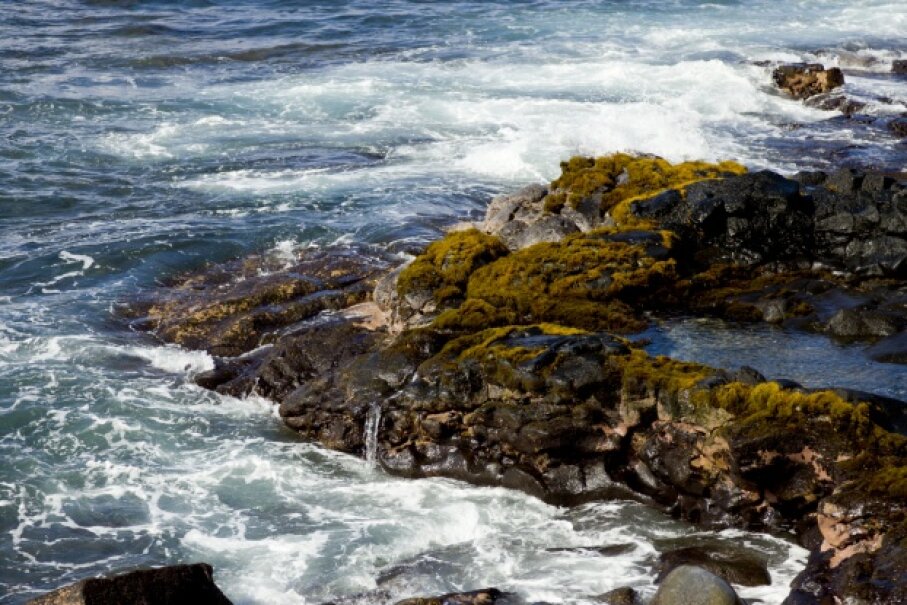 Kona Kailua is a great starting point for a drive along the Hawaii Belt. Josh Baker/iStock/Thinkstock

On the "Big Island" of Hawaii, three state routes -- 11, 19 and 190 -- form a circle around the perimeter. Locals call it the "Hawaii Belt." Driving around the Hawaii Belt, you'll see deserts of lava, lush jungles, farmland, active lava flows, snow-white beaches, mountains and valleys.

The Big Island gets its name from the fact that it's bigger than all the other Hawaiian islands combined. The complete route around the island is about 300 miles (483 kilometers) long. Most people making this drive will split the journey across several days, in order to enjoy the local scenery and attractions.

Travel experts suggest you begin your trip in Kailua-Kona, a town bordered by hardened lava flows. You'll also find the famed Kona coffee in this region. As you wind your way around the Big Island, you'll climb up to 3,000 feet (914 meters) in elevation and dip into lovely valleys. You'll discover dozens of towns and parks -- don't forget to stop and enjoy the local colors and flavors. 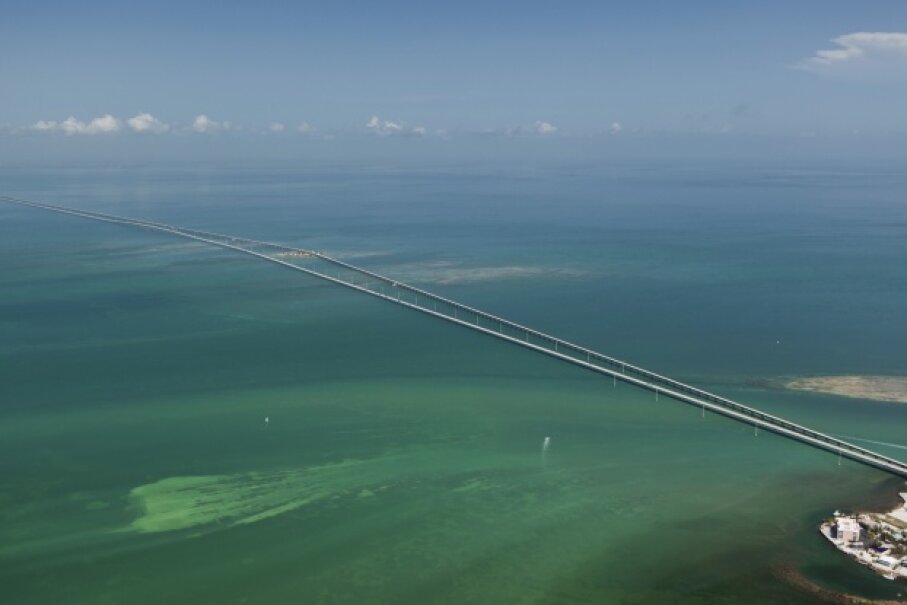 The Seven Mile Bridge in the Florida Keys Tinik/iStock/Thinkstock

Driving on the Overseas Highway into the Florida Keys is a unique experience. This highway is a 113-mile (181-kilometer) series of roads and bridges, from the Florida mainland all the way down to our country's southernmost point -- Key West.

These bridges, currently open to vehicular traffic only, are achievements in engineering. They are the survivors of Henry Flagler's Florida East Coast Railway, intended to connect the Keys to the mainland. Construction began in 1905 and finished in 1912. However, Flagler's rail project was unfortunately short-lived. A 1935 hurricane destroyed more than 30 miles of track. Restoration took years. In the process, workers converted the rails to highways. The Knight's Key Bridge -- now called the Seven Mile Bridge for the nearly 7 miles (11.2 kilometers) of water it spans -- is breathtaking to traverse.

As you drive from Key Largo down to Key West, you can still see remnants of the old railroad bridges. Some of them abruptly end in the middle of the channel, a ghostly reminder of Flagler's railway dreams. 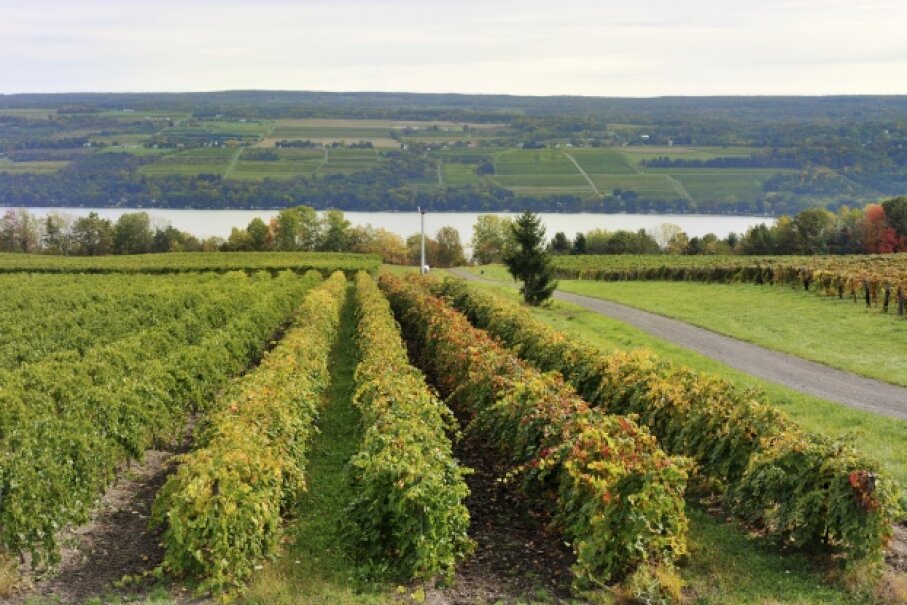 Plan to stop by one of New York's vineyards along the way. jimfeng/iStock/Thinkstock

Formed by glaciers, the lakes extend from an approximately 75-mile (120-kilometer) long line, from Syracuse to Rochester. The lakeshores are dotted with bucolic farmland, quaint towns and hundreds of wineries. The drive is lovely any time of year, but we recommend an autumn trip to take advantage of the dazzling foliage.

The region covers about 9,000 square miles (23,309 square kilometers), so most people choose a specific lake or towns upon which to focus. Travel enthusiasts recommend making a loop starting and ending in Ithaca. This loop is about 175 miles (280 kilometers) long. Give yourself a couple of days to make this trip. Along the way, you'll encounter lovely lakefront homes, farms and wine tastings. The area also features many natural gorges with cascading waterfalls -- a great idea for a day hike. 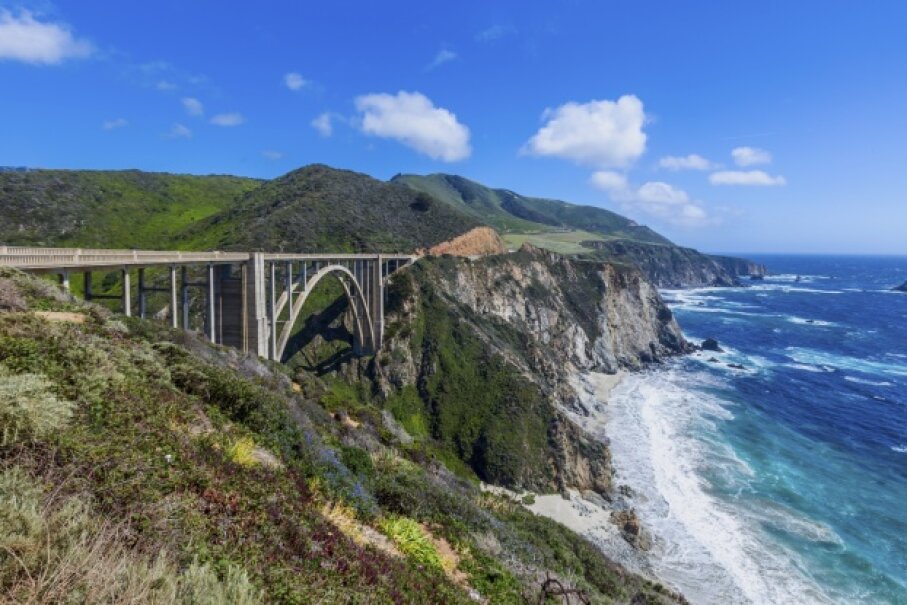 This California route is one of the most scenic in the world. Hugging cliffs and coastlines, the Pacific Coast Highway (PCH) follows much of the California coast. However, only a 123-mile (198-kilometer) stretch is the official PCH, as designated by the state of California.

Also called Highway 1, it takes about five hours to drive the PCH. The highway sees the most traffic in July and August. Avoid these times if you want to take a leisurely drive. In the winter seasons, drivers must be aware of danger from mudslides as well. Always check local advisories before embarking on your journey. The road often takes hairpin turns with narrow shoulders and steep drop-offs, so you must be alert at all times. Don't forget to pull over in safe places to really enjoy the vista.

As you drive along the PCH, make time for stops. You'll pass through Big Sur, with its majestic redwoods. In Monterey Bay, lucky visitors will get a peek at sea otters playing in the water. The PCH also winds through wine country, including Sonoma County. 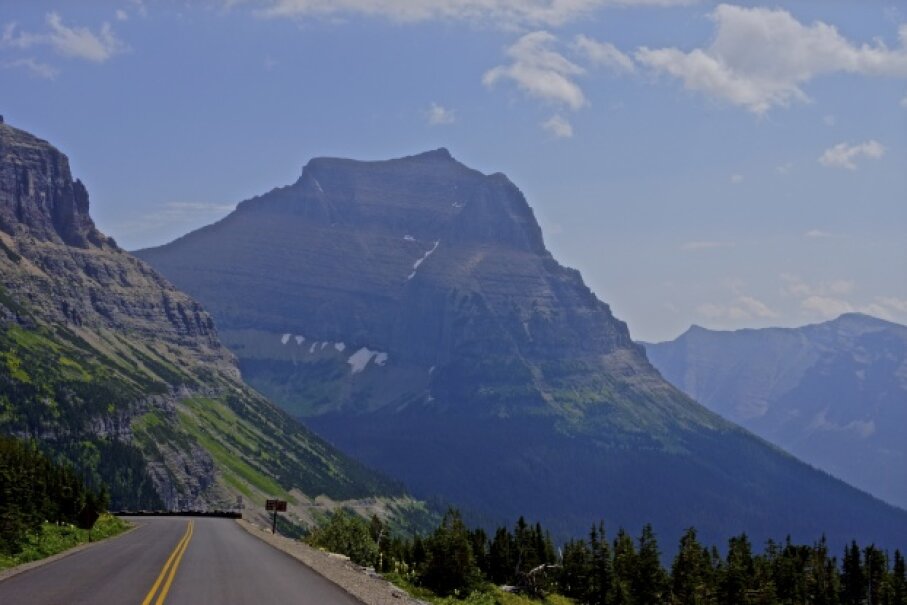 Glacier National Park is one of America's true treasures. Samson1976/iStock/Thinkstock

Going-to-the-Sun Road is a 52-mile (84-kilometer) road that bisects Glacier National Park in Montana. The drive is about two hours long if you drive without stopping. It actually crosses the Continental Divide at Logan Pass, which is 6,646 feet (2,025 meters) high.

The road passes through just about every landscape in the park -- glacial lakes and valleys, alpine tundra and cedar forests. You can see actual glaciers from the road, at Jackson Glacier Overlook. Because the road was specially built to traverse the park, it's well-populated with places to pull over and admire the view. Dedicated in 1933, officials named the road after a local mountain. It's also a National Historic Civil Engineering Landmark.

Going-to-the-Sun Road is open from June through early fall. In the winter, the area receives too much snow for the road to be passable. Park personnel spend early spring focusing on snow removal. Summer is the best time to visit Glacier National Park and drive the entire road. 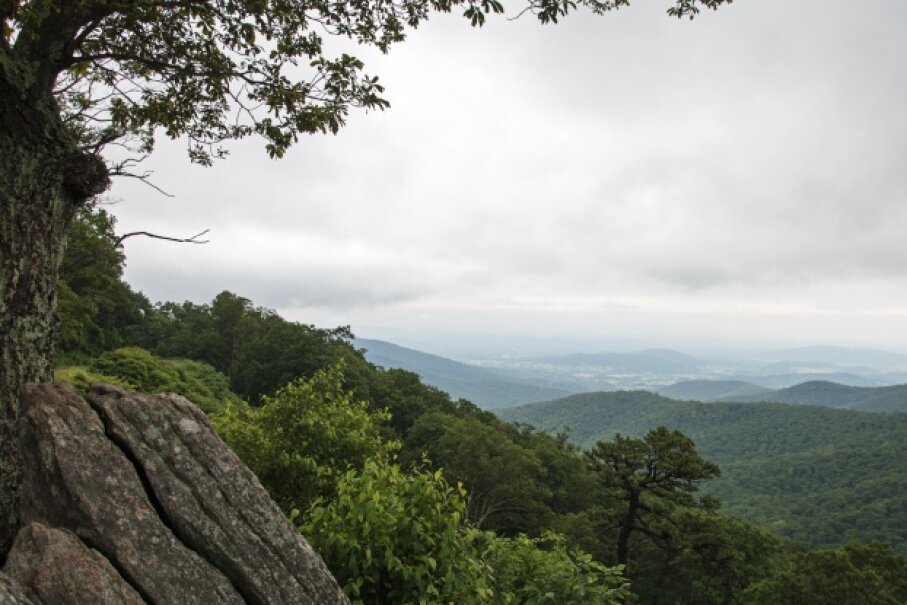 Here's one view you might take in on a drive through Virginia. sparhawk4242/iStock/Thinkstock

Along the crest of the Blue Ridge Mountains in Virginia, you'll find Skyline Drive. This road is a 105-mile (169-kilometer) drive through Shenandoah National Park. It is the only public road through the park. Cars, RVs and trailers are all welcome, provided they can clear the 12-foot, 8-inch high Mary's Rock Tunnel along the route.

It takes about three hours to drive without stopping, and features 75 scenic overlooks for taking photos. Drivers will see stunning views of mountains and valleys, flowers and wildlife as they wind through the park. Authorities keep the speed limit at 35 mph (56 kpm) throughout the park in order to protect the animals that often cross the roadway. Skyline Drive is dotted with various campsites and visitor centers along the route as well.

The best times to visit Skyline Drive are autumn and spring. Autumn provides miles of brightly colored foliage to enjoy. During spring, all the wildflowers bloom in an explosion of color. 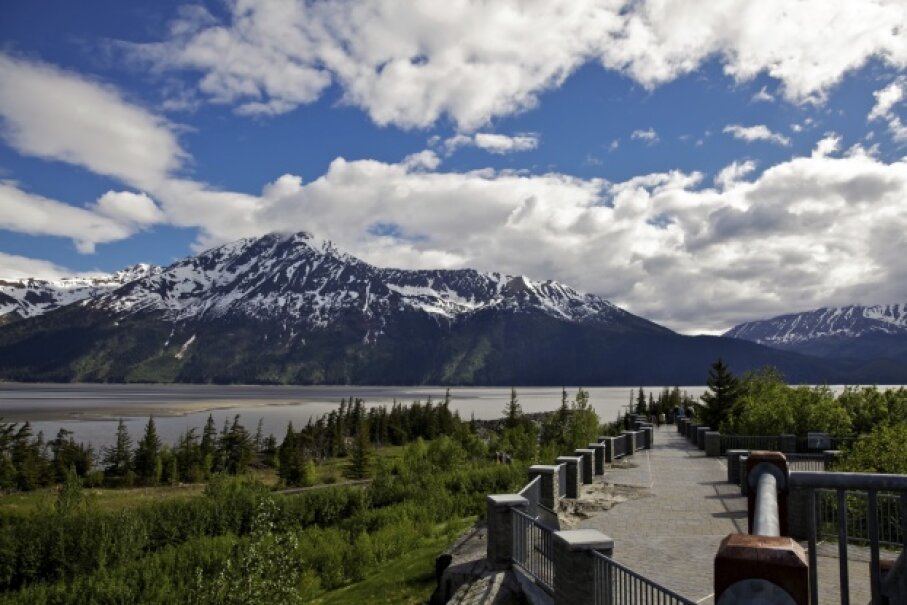 Four to five days a month, you can view the famous Turnagain Arm bore tide from the Seward Highway. Heather Nicaise/iStock/Thinkstock

If you're looking for something really different, try Seward Highway in Alaska. This road is 127 miles (204 kilometers) long and connects the cities of Anchorage and Seward. It takes about five hours to make the drive, but many people will spread the trip out over a few days in order to explore the area in depth.

Seward Highway holds a triple designation in the United States: USDA Forest Service Scenic Byway, Alaska Scenic Byway and All-American Road. The highway begins at the base of the Chugach Mountains and the shore of Turnagain Arm. In addition to gorgeous waterfalls and glaciers, tourists might see sheep, eagles, moose and even beluga whales. The most popular time to visit Alaska is during the summer, when the most sunlight is available.

The highway ascends 1,000 feet (304 meters) into the mountains and back down to sea level within an hour. The rest of the drive winds up, down and around the wilds of Alaska. You'll see fishing villages, mining towns and national forests. You can even stop off at a place called Crow Creek Mine to pan for gold. 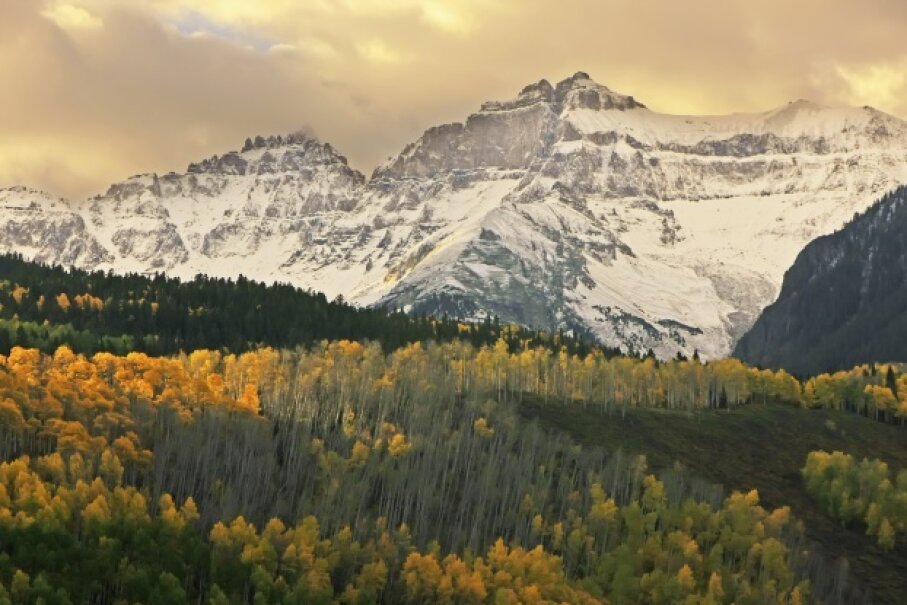 The Mount Sneffels Range is just one example of the majestic mountains you'll see. Donyanedomam/iStock/Thinkstock

The San Juan Skyway is a 233-mile (375-kilometer) drive through the San Juan National Forest, Grand Mesa, Uncompahgre and Gunnison National Forests in Colorado. It takes about five hours to drive, but allowing one or two days to experience the area is preferred.

This "road to the sky" provides views of the San Juan Mountains, quaint towns and ancient Native American pueblo ruins. The drive features steep cliffs, alpine forests, campgrounds and plenty of opportunities for outdoor activities. Mountain biking, hiking and skiing are popular pastimes in the surrounding area, and the Skyway encompasses it all.

Any time of year is a good time to drive the San Juan Skyway. It simply depends on what you want to see and do. In the spring, waterfalls crash down the mountains as the snow melts from higher up. The summer brings dazzling displays of wildflowers. And in the fall, the trees put on their own show of bronze and gold leaves. If you love snow and winter sports, drive the Skyway in the winter for spectacular views and great ski resorts. 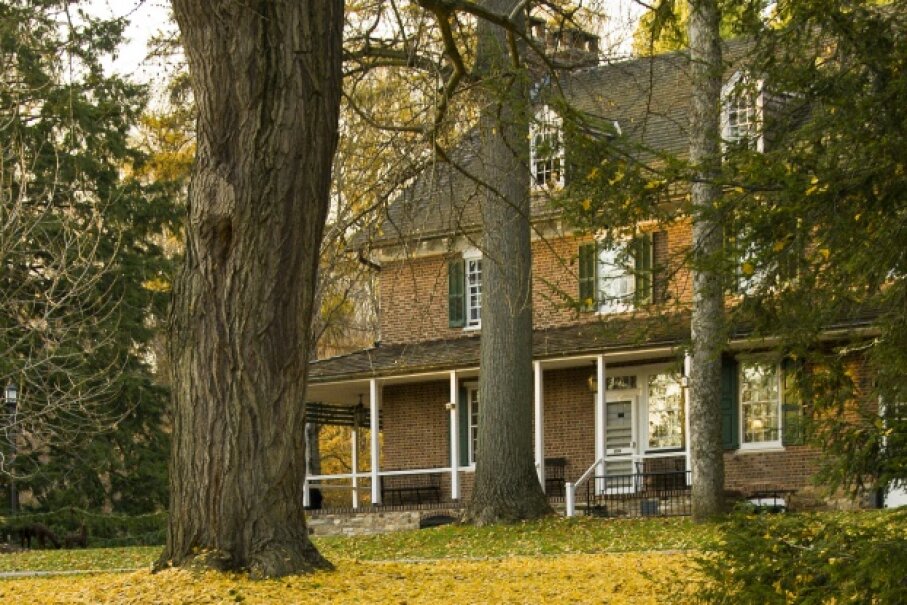 One of Brandywine's estates Steven Wynn/iStock/Thinkstock

In comparison to the other drives listed, the Brandywine Valley trek is brief. But it's as lovely and scenic as the rest. It's only a 12-mile (19-kilometer) journey through the Brandywine River watershed, but the landscape is unforgettable. As short as it is, though, the drive encompasses two states -- Pennsylvania and Delaware. Many tourists allow one to two days in order to visit some of the country mansions and gardens along the way.

The Brandywine Valley boasts the enduring influence of the du Pont family. The du Ponts made their fortune in this area, building their company and then mansions, gardens and museums. Also the site of the Battle of Brandywine in 1777, the Valley features rolling green hills that bring back thoughts of another era.

Due to the conservation work of the Brandywine Conservancy, founded in 1967, the area retains its charm today. Many of the old mansions and country homes are now open to the public to tour and admire. The Brandywine River Museum hosts many Wyeth paintings and other pieces of classic American artwork. 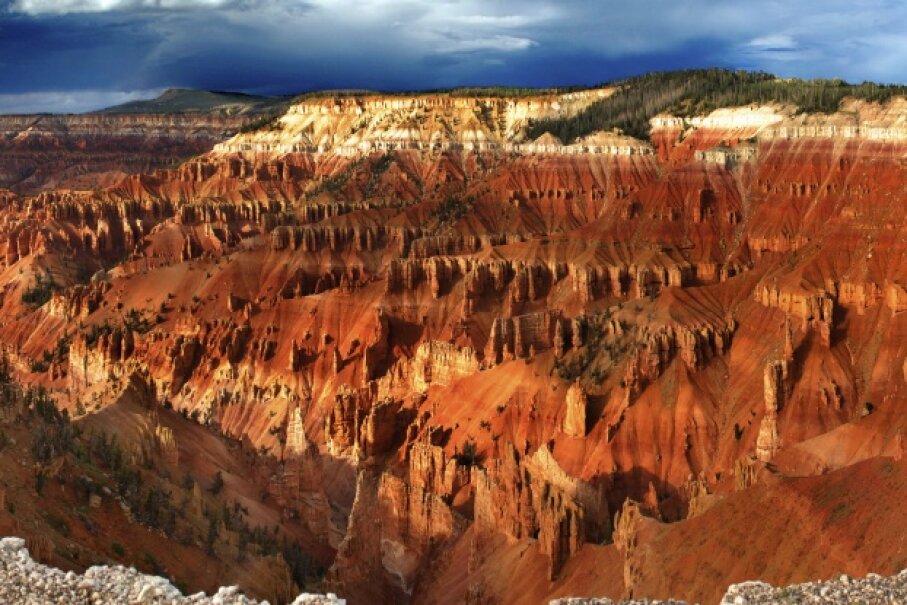 Patchwork will take you to Cedar Breaks National Monument. IcemanJ/iStock/Thinkstock

Utah's Route 143, also known as Patchwork Parkway, connects Heritage Highway 89 and Scenic Byway 12. The route is 51 miles (82 kilometers) and takes about two hours to drive. With historic pioneer communities at either end, you can drive this route once traveled by Native Americans and American Pioneers as they hunted and gathered. In fact, officials named the road after the pioneers who used to lay quilts on top of the snow in order to protect their feet from the freezing cold as they traversed the area.

The drive features overlooks and pullover areas where visitors can admire various peaks and plateaus, lakes, lava fields and canyons. Route 143 reaches an elevation of 10,567 feet (3,221 meters) at Cedar Breaks National Monument, making it one of the highest paved roads in Utah.

The scenery on Patchwork Parkway, as with most of Utah, is breathtaking. Mother Nature puts on a show with brilliant orange and red canyons, silt cliffs and plateaus covered with forests of pine, fir and spruce. The plateaus in particular offer remarkable stargazing opportunities.