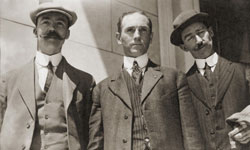 A portrait of three of the surviving crewmen from the Titanic, in 1912
Stock Montage/Getty Images

You've probably seen the movie, but did you know that you can dive to the bottom of the Atlantic to see the actual ship? Take the plunge with the only company that offers this thrill, Great Canadian Adventure Company, based in Edmonton, Alberta, Canada. For a cool $60,000, they'll put you on a research vessel in St. John's, Newfoundland, bound for the site of the famous 1912 shipwreck. Upon arrival, you'll board either the MIR I or the MIR II deep-diving submersible and descend 12,460 feet (3,798 meters) to the ocean floor. There you'll see the once-extravagant RMS Titanic resting in the same place it's been for a century. Hopefully you're not claustrophobic, though; at 7 feet (2.1 meters) in diameter, the submersibles' passenger compartments are just barely big enough for three people.

In addition to a calm disposition, you'll need some warm clothes for the dive. The temperature inside the MIR I and MIR II drops to a chilly 50 to 57 degrees Fahrenheit (10 to 14 degrees Celsius) while in the water.

Author's Note: 10 Adrenaline Rushes for Your Next Vacation

I consider myself a pretty adventurous person. Just about every time I take a trip it's to do some sort of outdoor activity, like rock climbing, mountain biking or backpacking. But my quest for excitement has its limits. Most importantly, I prefer to get my adrenaline rushes on solid ground as opposed to the air or water. So maybe we'll meet one day on the summit of the Grand Teton or on a Bolivian single-track, but don't expect to see me diving with sharks or flying through space anytime soon. But if you're game, I say go for it!